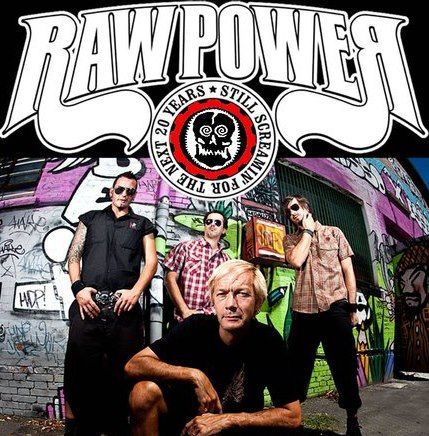 Poviglio, Reggio Emilia, not from a big city, but from a small country town come Raw Power. Giuseppe Codeluppi, one of the two founders, began playing the guitar in 1979 along with some boys of his town and formed a small rock cover band, Off Limit, sporadically involving his brother Mauro on vocals. During this time, without a real musical identity, Giuseppe first comes into contact with punk thanks to the first concerts in Italy and in Piacenza,  in a club that gives space to such groups that are starting up, meets Maurizio Dodi. And with Maurizio begins a new project, starting again from scratch, finding Helder Stefanini, little more than a boy, as a drummer, and his older brother Silvio as a bass player. The group kept the name Off Limit for a while, then, thanks to a record by the Stooges, changes and becomes Raw Power . Mauro, who had already sung in the band , is also involved this time, but, as he lives in London, he  will be replaced by his brother on several occasions at this time.

After a few concerts, the band record their first demo tape in 1983, the two tracks are included on the compilation of punk Italian Raptus, produced by Italy’s Meccano Records, the same label that released the debut album You Are The Victim a few months later . Raw Power begin receiving acclaim abroad, and thanks to Jello Biafra of the Dead Kennedys appear in the compilation of Maximum Rocknroll Welcome to 1984 with two more songs on the second volume of Raptus of Meccano, entitled Raptus: negazione e superamento ( 1984).

In 1984, a small American label, BCT Tapes, reprint in the US their first demo, with the addition of the historic concert in Pisa, the Last White Christmas, recorded in 1983. Through the same label and a series of contacts Raw Power arrive in the States in 1984 for their first tour, it is the first Italian hardcore punk band to tour there. A few months before departure Silvio, the bass player, was replaced by Davide Devoti, who Maurizio had met during his military service,and had also played in his band, the Chelsea Hotel. On this occasion Maurizio moves to bass and David becomes lead guitarist.

During the first tour of the United States, Raw Power play in Los Angeles with among others the Dead Kennedys in front of more than 4000 people. At that timeToxic Shock Records comes forward as the label for the release of the second album Screams From The Gutter. Is recorded in Indianapolis at the end of the tour, in the studio of Paul Mahern of the Zero Boys, in only a day and a half. The record was released in 1985 and sold more than 40,000 copies through independent channels, at the same time Live in the USA is published by BCT, a cassette with all the best songs recorded during the tour.

Other dates in Europe follow and a new U.S. tour in 1985, Helder is temporarily replaced on drums by Fabiano Bianco of Raff / Bloody Riot, with this line up the band record  a 7 “Wop Hour, which comes out the same year again for Toxic Shock, which also brings out the third record, After Your Brain (1986), produced this time in Italy and promoted in the States, all with several lineup changes, involving old members returning and others leaving.

A new era starts for the band: Alessandro Paolucci becomes the new bass player, Fabiano is confirmed on drums after some internal disputes related to the recording of Mine To Kill (Rat Cage 1989), the fourth album by Raw Power. This is followed by the first official live, Live Danger (TVOR 1991) and Too Tough To Burn (Contempo 1992) which feature Tommi Prodi as the new guitarist together with Giuseppe .

The mid-90s see the publication of a series of compilations, a new studio album produced by Don Fury, Fight (Godhead 1995), and another live album entitled, Live From The Gutter (Godhead 1996)up to the release of the seventh full length album, Reptile House (West World, 1998), with yet other lineup changes, there are more European tours and a few years later a new tour in America is organized by an old friend of Raw Power, Tony Patino. This tour begins and ends in New York, and during a concert in New Jersey some of the band’s equipment is stolen, due to the fact that the van is left unattended by the support band . Among the things stolen there is also the guitar that Giuseppe played for almost two decades. Back in Italy  the concerts continue and there are also some appearances on television programs.

Continuing to play all over the place, three other American tours are organized. Unfortunately, in 1999, several shows are cancelled due to the hospitalization of Mauro due to kidney stones, while in 2000, after recording Trust Me (Hello Records 2001), one of the best series of concerts in recent years takes place. The third tour will be the last for Giuseppe in the United States, because on the 6th of October 2002 he died suddenly. The band had recently celebrated 20 years of career recording the new album Still screaming After 20 Years, which was published later in 2003.

After losing their founder Raw Power at first stopped playing, and then decided to continue because Giuseppe would have wanted it that way.

After several line up changes a further series of compilations come out, the greatest hits album The Hit List (Sudden Death 2004), Fuck Authority (SOA 2005), a collection of tracks from the first albums, and The Reagan Years (Beer City 2010) with all the songs from the first album with the addition of bonus tracks and a DVD. All these works are complete with personal notes written by Mauro and other key members of the band.

In 2010, after a break from studio recording for 7 years the new album Resuscitate (Pig 2010) is released. Recorded the previous year in Seattle at Studio Litho (Stone Gossard of Pearl Jam) during yet another tour. It contains 24 new songs plus two covers of the Stooges and a new version of the old classic Mine To Kill. The line up which recorded this album is the one that has been together the longest and the one that still plays around the world today. Mauro Codeluppi (vocals), Tommi Prodi (guitar), Marco Massarenti (bass), Fabio Ferrari (drums).

In 2012, the Italian F.O.A.D. Records starts reprinting all of the classic albums of Raw Power, starting with the first Demo Tape printed for the first time on vinyl, entitled Birth, passing through the first four records, and adding for the first time totally new audio material, including the discovery of a totally unknown Demo dating back to 1982. For the same label, the same year, the split 7 ” with DRI released in 2001 is reprinted , this time in double flexi 7″ colored, with a previously unreleased bonus track . The same year also sees the release of “No More Borders”, a 4-way split 7 “together with MDC, Som-Hi Noise and Naked Aggression. The record is co-produced by different European and American  labels and contains an unreleased track for each band.

On October 7th 2012, unbelievably, another member of Raw Power, Luca “Lupus” Carpi, dies aged only 34 . Although not involved in the recording of the last record he had been present in the line up, playing live and sharing the stage with  the band for nearly 15 years.

Throughout 2013, the group plays continuously in their own country and across Europe, in April they are backin the United States to record what will be their latest album. At this time, they sign a contract with the American label Beer City, the album release is scheduled for mid 2014.

Over their 30-year career Raw Power have shared the stage with some of the most important groups of the punk scene, hardcore and metal world: Dead Kennedys, GBH, Corrosion of Conformity, Suicidal Tendencies, Motorhead, Cro Mags, Sick of it All, Agnostic Front, Circle Jerks, Scream, Adolescents, Rancid, Poison Idea, Slayer, Venom, DRI, to name but a few, and also in 1985 in a small club in Seattle, Guns N Roses a still unknown band open for one of their concerts.

This remains the longest-running band in the history of Italian hardcore punk. 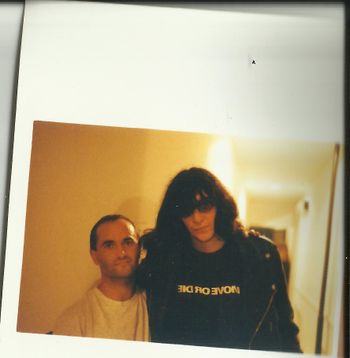 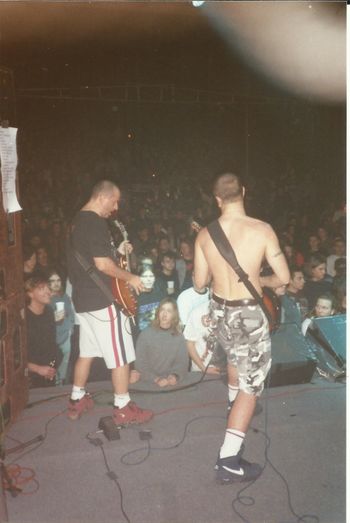 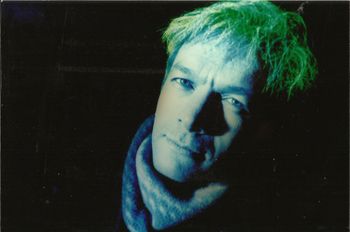 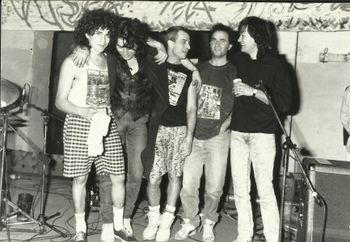 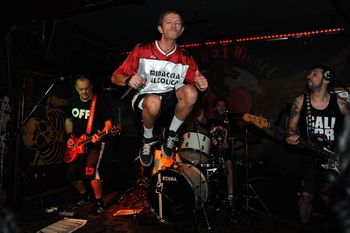 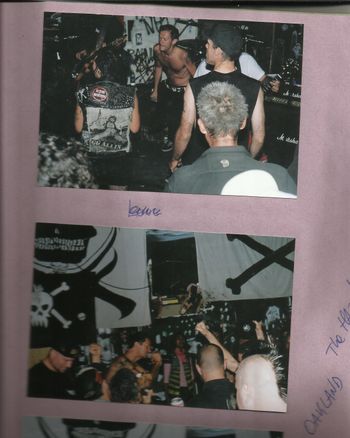 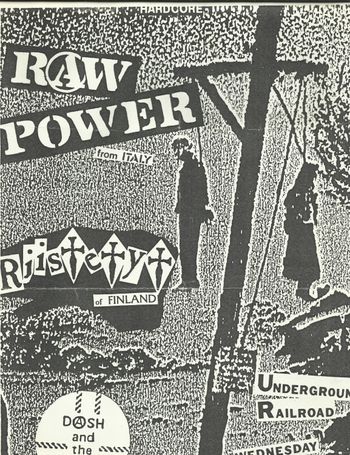